Life At The Traffic Stop

In Michigan, there’s a law that you can turn right on a red light after you have stopped and checked traffic. That is fine for small intersections and country roads. I don’t like it at major intersections because the traffic is farther away and you just never know who might be speeding along in a lane towards you. So I like to just wait at these stops for a green light. Then the people behind me honk and expect me to turn, even when I’m not comfortable doing so.
So I was going to be at one of these stops and I prayed for a green light. Well, as I got near, I could see that two cars were stopped at a red light ahead of me. As I paused, I relaxed. Their blinkers weren’t on so they were going straight through the intersection on green. I hadn’t thought about that possibility. It worked out splendidly and I made my turn on green as I like to do.

Several times I have told the Lord how to answer my prayer. I have a finances problem right now. I asked Him to work it my way. He declined that suggestion. He does promise to meet my needs. I know that He will provide in another way, a way I am not expecting.

That little incident at the light was the highlight of my day. I had much frustration trying to find some things shopping that I couldn’t find. All I could do was smile that The Lord met me and showed me He has everything covered, but in His own way. I just love it when He does that.

"Consider the lilies of the field, how they grow: they neither toil nor spin: and yet I say to you that even Solomon in all his glory was not arrayed like one of these." Matthew 6: 28,29.

I like to think of the lilies when I'm planning to dress up. They come in so many pretty colors. There are white ones, yellow and orange ones, even purple ones. And they are dressed up with their little freckled dots that makes them dear to my heart.

I'm sure that the Lord meant we are not to worry about clothes or provisions. And yet I believe we can also think that He wanted us be be as colorfully arrayed as His flowers. Does that mean that we can't wear blown, black, or neutrals? I know many heavenly minded people wore just these for a very long time. I don't see that in this scripture, though.

God made the gorgeous silhouettes: the black scrubby tree against the pearly moon. He made cactus and palm tree to stand out against sunsets, too. I think He loves these contrasts. We can enjoy them, too, when we dress.

So I'm putting on my sunset colors today - coral, black and blue. Tomorrow there will be something else to wear from His garden. And I will remember to trust in Him and let Him take care all of my toiling and spinning.

When you watch the Oscars or the Emmys or Grammys, do you think, I wish I could win one of those? What award do you dream of?

I’m sure that my writer friends who write only in one genre have a specific high and exalted award that they aspire to. I wonder how many there are and what they are called.

The only award that I would love to win is called the Newberry Award - the best book for children in a certain year. It usually goes to books for the 8 to 12 age. If I did aspire to one other award, it would be the Caldecott. This goes to the best picture book of the year. It has always been my dream to do a picture book and do my own illustrations. That’s probably not going to happen. Most of the winners have an artist and an illustrator.

To win any award, you have to work very hard, to be the very best in your field. That takes much dedication. Any time and effort you put into your dream takes time away from something else.
Many of my friends will reach their goals. I believe in them. I also had a goal of some child finding my book in the library and reading it and loving it the way I loved my books.

Many years ago, I had another dream. I was lonely and I just wanted a family. It didn’t seem like that would ever happen. Finally, by the grace of God it did. Now I am so blessed with the big 9 (like The Fellowship Of The Ring.) I even have more than nine people as you move outward from my circle of love. So I may not get any awards. I may not write another book. I could, but I don’t have that drive anymore. Time is so precious, but I am open to whatever God has in store for me.

If you're in the writing process right now I'm rooting for you. I'm just having fun exploring possibilities.

A Season For Dolls

Do you play with dolls? I did until just a few years ago. I didn't actually play with them. I did enjoy displaying the fancy ones and changing clothes on my American Girl dolls to match the holidays. I even put "back to school" clothes on them. "Molly," one of the first three American Girl dolls, has a little red school bag that is nearly identical to one I had in the fifties.

When I was young, as you can see in this picture, I was doll crazy. My favorite thing was to line up all my dolls, from largest to smallest on the bed and put all of their clothes at their heads and them change them according to where they were going. They always went to church or to school as that was just about the limit of my world back then. They all had clothes, even cheap little dolls from the five and dime store, because my mom was very clever at making them for me.

As teens, we three girls accumulated a small doll collection. It started with what are called Story Book Dolls. These were about 6" and had pretty dresses. As the name suggests, they depicted stories from fairy tales. We also got small dolls from our trips. My world expanded when my parents took us places. New York City, Pittsburgh, Niagara Falls. So we put our collection in one window of a four-tier set of barristers, rectangle cases with glass fronts.

As soon as my daughter, Dawn, was old enough, I got her Molly and I got Felicity, another American Girl doll. We played together. Again, I just dressed the dolls. Once in a while, I would do a doll voice and pretend to be a doll, but not often.

As Dawn got older, she lost interest in the dolls. This is when I just dressed the two dolls for the holidays. Then, I got to where I didn't want to bother with it. The dolls are now in my cedar chest. I'm the caretaker until Dawn can have a girl of her own to play. It's funny, when I see doll displays in stores, I'm not even tempted. I guess everything has a season, even my fascination with frilly, pretty, little dolls. 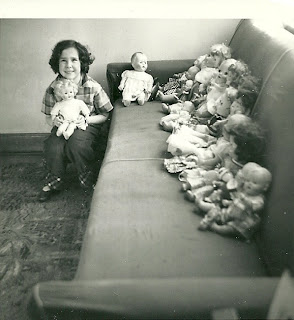 Fashion Rules - What Do You Think?

Sunday I was greeted by a friend at church. I wore a tan and white jacket, white T and a white skirt. We got to talking fashion and I said I wanted to wear my white skirt one more time. I laughed and held up my basket purse. "I'm going to switch this to my black one for next week."

She looked at me sort of funny and said, "Why?"

I then explained that I liked to start dark colors in the fall. She said, "Oh, do they still do that?" I said that I knew it was still summer for a while.

That conversation got me to thinking. I believe she meant, do they still do the white from Memorial day through Labor day" thing? Or maybe she meant do they still do dark and light colors at all?
Being able to wear white sandals as long as you want or white skirts, or summer purses is probably a good thing. It is funny though because I wore that same skirt in the spring with a flower blouse and I got a "you're early" comment. I guess I can't win.

Do you put away summer clothes in early Sept.? I do. It's one of my favorite things to do. I love fall clothes and of course I have quite a lot of pieces that stay all year. What I want to know from you is: do you find it freeing to have fashion rules or do you like the 'anything goes' thing?

For me, and I admit I'm a traditionalist, I like to know some things are for summer and some are not. I still wear dresses and skirts to a church where nearly every lady wears slacks or jeans. I guess that's just one more place where I'm over the hill.

One more thing, I do like some of the new freedoms. I am thankful that I can wear gold and silver together, brown and black together, and that my purse doesn't have to match my belt and shoes. That is freedom to me. 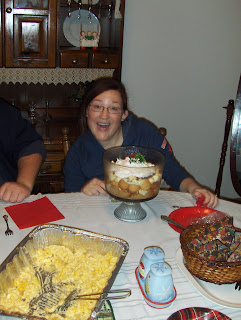 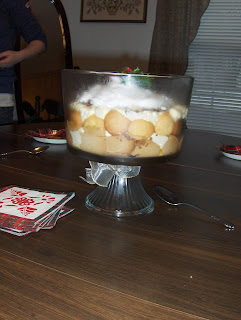 Here is the recipe some of you have asked for. It is handy for Christmas, birthdays, showers, etc.


Beat cream cheese on medium in large bowl and then add milk slowly. Add the pudding mixes slowly. Stir in two cups of the whipped topping.


Set out 24 wafers and line a 2 and a half quart bowl (use the kind on a stand if you have one) on the bottom. The rounded parts should be up. Line the sides having the rounded part facing outward. Put 1/2 of the coffee over the bottom wafers. Scoop 1/2 of the pudding mixture over the wafers. (Be careful. Take two spoons, a large one and a small one. Scoop one big scoop and push it with the small spoon against two or three standing wafers. Do this all the way around setting the wafers up if they fall down. Then put the rest of this portion in the center and smooth it out nicely.) Top this with 1/2 of the chocolate. Then do another layer of wafers, coffee, mixture, and chocolate. Put the rest of the whipped topping on top.

If you want a bit of color, you could drain a few strawberries or raspberries for the top. I added fake holly once. Tie a pretty bow to the stem to match the event and Voila! What a surprise for someone. A bonus - with the sugar free puddings, this desert is lower in sugar grams than most. 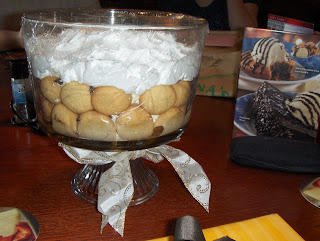 "Success is the ability to go from failure to failure without losing your enthusiasm. "

Be yourself - you're qualified.