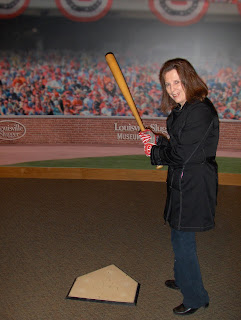 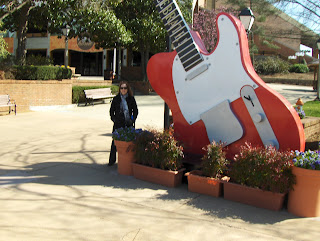 After we visited with my daughter and her family for a while, Larry and I headed off to Nashville. I love the area. We got lost locating the new site of the Grand Ole Opry. We had wanted to see a show in the new auditorium. It turned out that the theater was being used for a private party at the time. The picture of me beside the giant guitar was taken outside this facility. We then decided to retry visiting the Country Music Hall Of Fame. The last time we were there a few years ago, we were on the second floor, just beginning to enjoy the Hank Williams exhibit when the lights went out. There was a blackout in the city and we had to leave the museum. This time we saw the whole thing, but we just missed the Hank Williams display by a few weeks. They change things around and we just had a different exhibit. I enjoyed it anyway as I like to see the films they have of old time T.V. shows. I saw a very young Dolly Parton.

In the next few days, Larry played golf at a club in Murfreesboro or near there and he used his new hickory shaft clubs on a few holes. He is always getting into something new with golf. Dawn, our daughter played and I rode along. (I tried golf early in our marriage, but I was awful. There is really no other word to describe it.) Dawn and I went shopping for her baby to be and for a few maternity things for her.

On the way home, we stopped at Louisville, Kentucky and toured the Louisville Slugger factory. That's a picture of me swinging Mickey Mantle's bat. The tour was fun and informative. We each got a miniature bat as a souvenir.
Our trip home was uneventful. We stayed overnight in Ohio and came home on Friday. There's so much to see in Nashville, I'm glad my relatives are there so we can continue to enjoy the wonderful city.