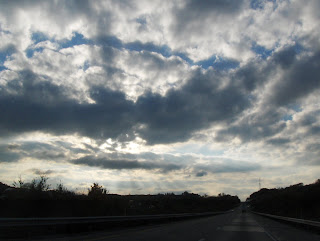 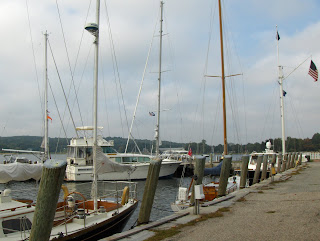 We were up early the next day for our last round of sightseeing. We headed through Rhode Island and stopped at Newport. Our guide book said we could park and take a walking tour of the beautiful old homes there. We had our usual parking problems, but finally drove through the entrance of one of the houses. There a worker said we had to park and pay to see the house. Then, I guess we would have to do that for the others as well. We thanked him and drove on. Since we couldn't do what we wanted, we just drove slowly along and took pictures of the outside of some of the pretty houses. We parked at a turnaround near the water and I got a great blue show of lampposts and a house in the distance.

Traveling on to Connecticut, we aimed for Mystic. These two places were my sister's choices. They turned out to be quite charming. Jean had told me we would be eating pizza in Mystic. I knew there was a movie called Mystic Pizza. I thought it was just any old pizza place, but found out that there was an actual restaurant called Mystic Pizza. That was to be our evening treat. We found a place called Mystic Seaport. If you are from Michigan, you will know what it was like when I tell you that if was sort of a seafaring Greenfield Village.

Small shops and crafts and old time businesses were transported to the place. We saw a lady blacksmith make a Martin spike. She was so nice and a good speaker. A printer spokesman told us how upper and lower case letters got their name. It was their actual placement in a printer's box. We learned that a "first impression" is what the first printed sheet is called. "Copy" is anything you tell or write down.

This place was great for outdoor pictures. I got a picture of the boat Amistad, which was used in the movie and actually just came from Cuba.

One of my favorite things here was a whaling building which showed a film of getting a whale, from the first sighting, to the men's cleanup. All along, the narrative was from Melville's Moby Dick.

We found our restaurant and took pictures under the sign. The movie was playing non-stop and the poster was on the back wall. I will say it was great pizza. We also got a flattened penny from a machine with Mystic Pizza embossed on it. The last time I had one of those was when I was a wee girl at Niagara Falls. Such nostalgia.

We were to have one more treat. Saturday, our last day, we headed home. We ended up getting stuck for nearly two hours on the George Washington Bridge. It isn't fun when four or more lanes try to merge into two. Finally we were through and eventually passed lovely New Jersey and into Pennsylvania. We traveled on a new route 80 that was so scenic and had very few cars. I took pictures outside the car, as we finally saw some color on the trees. Then as weary travelers, still taking pictures off and on to keep busy, God put on a light show just for us. One time it seemed the clouds looked like flying saucers, other times they swished up like a brush had been at them. Finally as the light faded and the sunset colors came, we just kept getting good pictures. We put the cameras away, and then it lightened up and we took more. When we finally got home later that evening, we both burst out in a praise song to God for his loving care through the travels, the many times we just made it to some interesting spot, for the fellowship, the final light show to keep us awake, and just because He is worthy and it was such fun to let out a roar to finish the trip.

I hope you have enjoyed my travelogue. If you plan to visit New England, I know you will have a great time. I believe there is a lifetime of beauty, history, and excitement, just in those few states. Happy traveling. Nancy

I just found out that I received a lovely "One Lovely Blog Award" from Susan Reinhardt. What an unexpected honor. Thank you so much. I'd like to pass it on to Janean at Old Sweetwater Cottage for her always beautiful cottage pictures.