Rush to The Oyster House 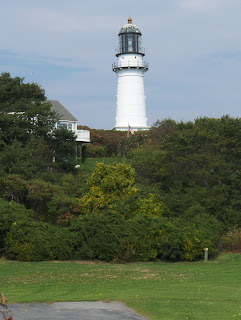 Last time, we just had a great dinner at the Lobster Shack. Our original plan was to go back through New Hampshire and see the fall colors. Since the leaves weren't at their peak yet, we decided to skip the scenic tour and stay in Maine for another day. That was great for me because I had already fallen love with the state.

We rose early and went on a search for lighthouses. We found that the first one was at a great distance. It was Portland Head Light in Fort Williams Park. I was fascinated by old wire lobster cages, ropes, and other materials on the beach. There was an old post with handles on each end. We weren't sure what that was for. I got a good close-up still life of good debris, but no one else was very interested in it.

We came back to the lighthouse we had seen the first night and got some great closeups of it. As far as we can tell, it was called Two Lights Lighthouse. We came back to the Lobster Shack and took lots of pictures. I just loved the coast and the crashing waves and the weathered rocks. A private lighthouse was near and we got some very good shots of that, too.

It was about here that my camera started acting up and I was afraid I wouldn't be able to get any more pictures, but it just needed to be recharged once again and treated with more respect.

We left Portland and headed for Kennebunkport. We got lost of course, but it turns out that every road seems to lead there. We were very late having lunch. We had had no breakfast. So we were looking for a place called something like "It's Always Breakfast." We went through town several times. Finally got a place to park and walked around. We got directions, but still could not find the place. Finally we ended in a store/restaurant and there on a sign it said, "always breakfast." It was just to inform us of the menu, not the place we were looking for. We had a great brunch. I told my husband that Kennebunkport has the best bacon I have ever eaten. There were casual pictures of President George Bush (the first one) on the wall with some lovely looking townspeople. I even thought I saw an acquaintance in a photo on the wall, but on asking my husband about it, I guess I was mistaken. We never did find that silly old restaurant, even though we gave it one last look on the way out of town.

Now we had to hurry so we could be in Boston by about 5:00 so we could find our hotel, unpack, and get to our reservation at the Union Oyster House on time. We made it by five, but parking and missing a turn and getting back in place in Boston is very tricky. We were nearly at our wit's end, but finally got all settled. We had no time to change as we had planned, so we saw one of the oldest sights in our traveling clothes.

Jean, my sister, had lobster again - this time a lot more expensive. I had something light and Boston Cream pie. The place is very historic. There are great pictures of Daniel Webster, and battle scenes and a famous Kennedy booth. I'm so glad we went there.

Next time, the rest of Boston.