Blue Ribbons and Other Things 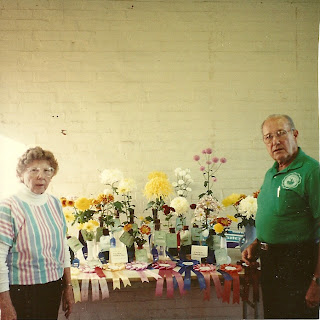 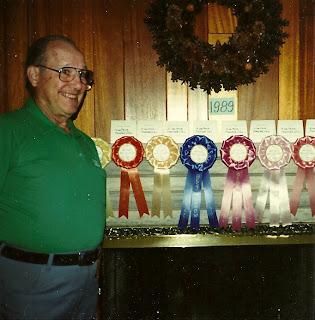 This autumn time of year reminds me of my dad and the great mum shows which he participated in. All summer long he nursed his babies. He built a wooden box with a top to shade them just so. He was always pinching and fixing up and nourishing them in one way and another.

He was greatly rewarded for his efforts. First he conquered the Mansfield Garden show in Ohio where he lived. He won many of their best prizes and then he went to Columbus. Here he was no second best either. He often took first prize in many categories and a few times he even got best of show. That means that one of his entries was the best of all the different venues.

Lest you think that this doesn't look like too many prizes, let me tell you that he had a hand made glass case in the basement with row upon row of ribbons. When he passed away, we had boxes and boxes of them saved. I wish I would have kept one. I guess I was just too busy or upset to think about it then. I'm so glad I have these pictures. My dad was an excellent photographer, woodworker and gardener. His one sad point was that he couldn't write. He thought he couldn't, but he wasn't that bad. He just felt nervous when he had to type a letter to somewhere important. He was very nice to say how much he enjoyed my stories about him.
I see flower beds everywhere and I think of how he loved gardens everywhere he traveled. It's wonderful how we all have different gifts. His gift was that he was not an artist but a craftsman and he worked very hard to make sure that his offerings showed the best that he had.